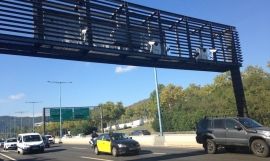 An impossible speed for her Audi Q2. The woman has appealed the fine, but the Barcelona City Council has not accepted her appeal. Therefore, she has decided to tell her case in El món a RAC1.

For the time being, the family has had to pay 600 euros and accept the withdrawal of six license points because it has already exhausted the administrative route. However, they assure that they will not stand idly by and will take the case to court.

But Barcelona citizens already know their location and slow down when passing in front of the cameras. «The objective is to ensure that vehicles do not slow down as they pass a radar control point (the vast majority of drivers are regular users of these roads and already know the points where fixed speed cameras have been installed) and that the average speed is kept within the established limits,» the city council acknowledges.

The system is based on license plate reading by means of high resolution digital video cameras, with a non-visible wavelength laser illumination system, low power consumption and very long life. It will also take high-resolution digital photographs and send them directly to the UDIG, where all traffic violations are managed. The cameras automatically read the license plates of all cars passing on the road, whether they are punishable or not, although fines are generated automatically when it is detected that the speed limit was exceeded on the stretch of road.

The entire route is potentially dangerous and conflictive, Reyner explains. Drivers on this road need to moderate their speed in order to «avoid sudden braking». In fact, accidents on this stretch of road are mainly caused by not respecting the safety distance, distractions and speeding.

This is one of the methods with which the Guardia Urbana tries to control one of its main objectives: that speed limits are respected on the roads of the Metropolitan Area of Barcelona (AMB).

After receiving the fine, it was clear to him that it was a mistake and he filed an appeal. They attached the technical data sheet of the Audi Q2, which indicates that the vehicle cannot exceed 218 km/h. The Barcelona City Council has rejected the appeal with the argument that the radar «is approved» and that «there is photographic evidence of the identified vehicle».

For the son of Maria Teresa, Manel Fernandez, who has been in charge of all the bureaucratic paperwork, no one has looked at the appeal. «It is a generic answer, it can not be. There should be a person who saw that this speed is impossible.» And he denounces the problems he has in communicating with someone from the fines department: «Every time I try to talk to someone it’s impossible. They tell me to file an appeal.

For the moment, the family has had to pay 600 euros and accept the withdrawal of 6 points from their license because they have exhausted the administrative route. They do not want to give up and assure that they will take the case to court.