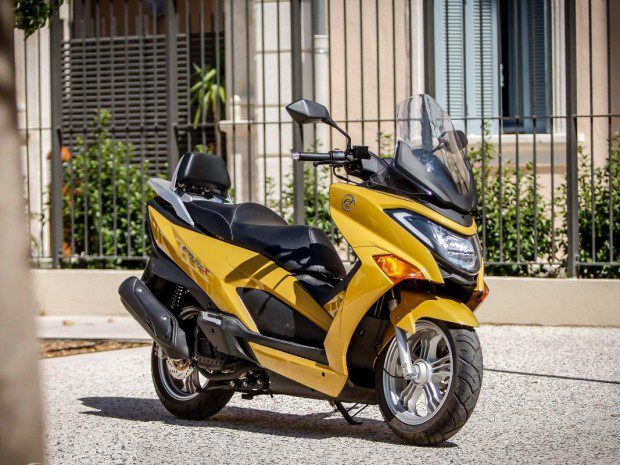 The first Daelim Steezer S 125, which saw the light in 2015, already surprised us by mounting a completely new engine, with 4-valve cylinder head and liquid-cooled, which placed the radiator laterally and with a fan behind it, which sucked the fresh air instead of blowing it. Well, now, prepared for Euro 4, it still delivers a generous and very usable 12.5 hp at 8,000 rpm.

The finishes have a remarkable level for the price of this scooter, which is equipped with daytime running lights and LED taillight, folding passenger footrests, which open by foot button, central switch that locks the steering, turns on the ignition and opens the fuel filler flap and another button that opens the seat remotely. All this thanks to another practical gadget: the Smart Key that, carried in the pocket and without removing the gloves, allows access to everything mentioned above.

The 4V LC motor is surprisingly smooth: no vibrations or abruptness. You could ask for a little more verve in acceleration, but 12.5 hp and a long development do not give more than that. On the other hand, it stretches up to 110 km / h of marker (about 105 real) with patience. Consumption, without being spectacularly low, is contained, with an average of 3.6 l per 100 km.

Even if we decide to move around town with a 125 motorcycle, it is almost certain that sooner or later we will need to move either by roundabouts or by some ring road. If we also do it regularly, we need an ally that makes us that comfortable ride and the Daelim Steezer 125 S is an option.

A detail that is pleasantly surprising is that we are talking about an economic model but with quality details such as the smart key. A very convenient solution with which the bike is handled completely just by carrying it in your pocket. That is, we can not only unlock and start it, also opens the tank and the hole under the seat, which is very practical.

As for the brakes, the braking is combined and the feeling it gives at first is that it does not have enough bite, but if you keep braking the bike stops and not having ABS can even lock the brake. However, if you use the rear brake, by activating the combined braking also, the bike (of course) stops much faster.

Despite this, the benefits of the central reinforcement are undeniable, even at high speed you notice its greater rigidity, which translates into a more poised steering, more confidence when leaning and greater effectiveness on the road. At the same time, in line with the greater resilience of the chassis, Daelim has also equipped its Steezer S with slightly more consistent suspensions; these, together with the 14-inch wheels and large-section tires, form a very stable set in any circumstances.

As for brakes, as usual, the Steezer S mounts a disc of good diameter on each axle that, of course, are protected by the well-known integral braking system designed to simplify driving while increasing safety.

We also found changes in the seat, which is longer and under which is a much larger compartment with capacity for up to two full-face helmets of any size. To access this main cargo compartment just press a button and has LED lighting inside and 12V power outlet.

Both axles of the Daelim Steezer S use 14-inch rims, with 220 mm diameter disc brakes with combined actuation through the left lever, thus anticipating the European brake regulations for 125 cc vehicles that will come into force in 2017.